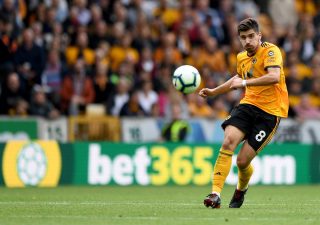 Manchester United welcome Wolves to Old Trafford this weekend on the back of three consecutive wins away from home.

A turning point for the season early on? We should hope so while also hoping our rivals – Liverpool, Chelsea, Manchester City – encounter a similar slump. Tottenham are already in the middle of one after three defeats on the bounce.

With Wolves coming to Old Trafford on Saturday, I caught up with Dave Azzopardi, a 21-year-old Wolves fan who has been following the club since he can remember. He’s been a YouTuber for three-years and recently set up his own Wolves focused social media channel, Talking Wolves.

Firstly, we’d like to thank Dave for answering the following questions. Top man!

What have you made of your return to the Premier League?

Wolves’ return to the Premier League has been very good so far. Plenty of pundits have said how well we are doing which is obviously great to hear but, at the same time, I think I would be fairly disappointed if we dropped many points than we currently have. I think the best result so far is, of course, the draw at home to Manchester City. Other than that, I would be pretty disappointed if we didn’t get the points that we have so far. Saying that though you always see plenty of promoted sides defend or not play “football” in their first year but Wolves are still playing the attacking style of football they were last season which as a fan is absolutely fantastic.

Give us a bit of background on Ruben Neves and whether you think Wolves will keep hold of him beyond this season?

I love Neves, as all Wolves fans do. There is no denying that his potential could see him play with the world’s best. We signed him up for around £15 million in the Championship which was a massive gamble. It paid off massively and he helped get promotion and already proving his worth in the Premier League.

There are already big teams being linked with him and no doubt we will see bids thrown around for him. I think the future of Neves really depends on Wolves’ progression. We’ve attracted huge players already and I’m sure more will come. As long as Wolves and Nuno can convince Neves we are the real deal, I think he may stay longer than people expect.

How do Wolves fans view Jorge Mendes’ influence over the club nowadays? Sure, it has short-term benefits but long-term?

The Jorge Mendes influence is a really interesting one as there were and still are so many football fans that see the negative side. I’d probably say 85% of Wolves fans are happy/okay with it but of course there are some who aren’t fully convinced or don’t really understand it. Probably 80% of the Mendes clients have been good signings for us. We have had 2/3 that weren’t quite good enough but his influence has definitely had a big part of our growth. The good thing about this is that our owners aren’t stupid. Of course, if United came in for Neves or another client for £100m, he would be rubbing his hands together but the Wolves board will want the best deal for them, not for Mendes and that has been said plenty of times. Currently, the situation is okay but I think long term, we won’t need Mendes to attract top players.

Hmm. Time will tell. Anyhow, what are your objectives for this season?

In terms of aims this season, I think I’d be happy with a mid-table finish. Anything more is a huge bonus for me as a fan. There are a handful of Wolves fans who are expecting European qualification, mainly due to the names we have brought into the squad. As much as I’d love that, realistically I think a cup run would be the best chance of that. Other than that though, as long as Wolves remain competitive, play exciting football all season, I’m sure fans and the board will be happy.

Do you fancy your chances against Manchester United at the weekend?

Manchester United is always a huge game, especially at Old Trafford. A lot of my family abroad support United so it’s almost like a second team for me. The start for United has been okay, of course, pressure is on Jose but I think he has responded well to the negativity. It’s never an easy game, even when United are on a “bad run”. I reckon a draw will be great for Wolves and I think a number of United fans may take that. But I expect it to be an exciting game, both sides can attack and defend well so it’ll be a good watch.

Finally, what are your thoughts on Jose compared to other top managers currently in the Premier League?

I’ve always liked Jose for some reason. I still think he’s one of the top bosses in the world and I think a lot of people just rate him on his style. He gets results and that’s what football is all about. If United backed him with a few more top players I think he can definitely go head to head with Manchester City and Pep. I hope the United fans continue to back him and he doesn’t end up leaving Old Trafford.