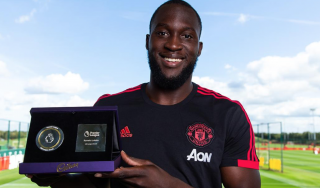 Romelu Lukaku has 100 Premier League goals to his name and is Belgium’s all-time top goalscorer at the tender age of 24-years-old.

It’s a remarkable record and the best has yet to come. The former Chelsea striker knew he had to leave Stamford Bridge at an early age to develop his game and was brave enough to join West Brom and Everton to achieve that.

The same is being suggested about Marcus Rashford, though Lukaku’s circumstances at Chelsea were different. He wasn’t getting anywhere near the same minutes as Rashford is for United and was left with no other choice but to leave. Now, he is regarded as one of the world’s best centre-forwards.

Lukaku’s first Premier League goal came against Liverpool and the United striker was quick to pop a joke about that. Well, not a joke. There are few better things in life than getting one over that lot.

Watch the brief interview below: