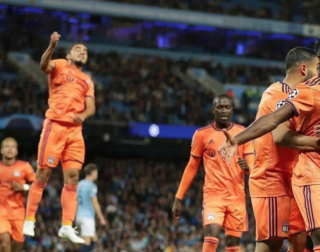 Lyon right-back Rafael da Silva showed fans that he still has a special place for Manchester United in his heart after Lyon’s shock 2-1 victory over Manchester City in Wednesday night’s Champions League tie.

The Brazilian returned to Manchester after spending seven years with United. Rafael has three Premier League titles from that time as well as winning the League Cup on two occasions and the Community Shield three times.

Rafael made 109 appearances for the Reds and became a fan favourite alongside twin Fabio da Silva during his stint at Old Trafford.

He was one of the star performers last night as the Ligue 1 side recorded a 2-1 win over City.

Rafael was seen passionately celebrating Maxwel Cornet’s first-half opener, thumping the air and letting out a roar with delight.

The win marked the third time Rafael has tasted victory at the Etihad Stadium and, in many ways, it looks liked he enjoyed this one the most.

He made sure he was the last player to leave the pitch at the end after celebrating with Lyon’s away support.

Following the match, Rafael took to Twitter to retweet a picture of himself in a United shirt, with the caption “Once a Red, always a Red! Thank you!”.