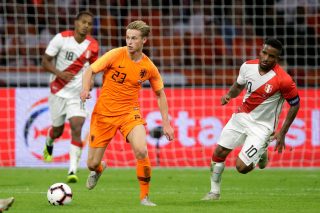 Barcelona have been long linked with a move for Ajax youngster Frenkie de Jong, but it’s now reported both Tottenham and Manchester United are also keen on the highly-rated Dutchman.

With the 21-year-old continuing to impress for club and country, it was only a matter of time before more big clubs were linked with De Jong.

He sounds like the perfect Barcelona signing too – technical quality and ability on the ball coupled with room for further development – but they are likely to face a transfer scrap to secure his signature.

According to The Sun, Spurs and United will now be hoping to ruin Barcelona’s plan to sign the £50 million-rated ace.

The Catalan giants were busy addressing their midfield this past summer, signing Arthur and Arturo Vidal to fill the voids left behind by Andres Iniesta and Paulinho, but they’ve shown no signs of stopping there.

Ernesto Valverde is also believed to be targeting United midfielder Paul Pogba, though De Jong could be seen as an alternative option even if he sounds more suited to Barcelona…

De Jong could be a long-term solution given the likes of Sergio Busquets and Ivan Rakitic are now on the wrong side of 30.

However, Jose Mourinho and Spurs boss Mauricio Pochettino might have something to say about that. De Jong would be a good addition for all three clubs involved and we’ll likely hear about more clubs wanting to sign the Netherlands starlet before the transfer window reopens.

The Reds signed Fred this past summer and along with Pogba and Nemanja Matic, the trio will prove crucial as the season goes on. There are also backup options in the squad such as Marouane Fellaini, Ander Herrera, Andreas Pereira and Scott McTominay.

It is also added to The Sun’s report that the Reds sent scouts to watch De Jong in international action earlier this month.