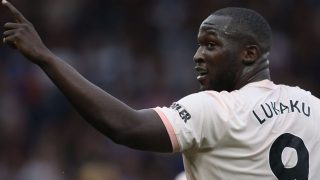 Jose Mourinho hailed Romelu Lukaku as the identikit spirit of his United side after an eye-catching performance at both ends of Vicarage Road on Saturday.

The burly Belgian found the net for his fourth goal of the season in our 2-1 win having hit a brace at Burnley and opened the scoring at Brighton. Still only 25, he’s now scored more times than Didier Drogba in the Premier League – the same Drogba widely regarded as one of the all-time greatest exponents of his craft and one of the most complete centre forwards the English game has seen. It’s even more impressive when you consider United has been the first big club Lukaku’s played for on a regular basis and the fact that he’s not hit his peak yet.

Red Rom hit 28 in his debut campaign at Old Trafford – a figure that would surely have been 30 had it not been for the injury that prematurely curtailed his season. An impressive haul for any United striker, especially one who came with a hefty price tag alongside the immense pressure of a step up from the benign surroundings of Everton to leading the line for the biggest club in the country and one of the biggest on the planet.

Lukaku’s prowess in front of goal has never been in question – even in the fledgeling days of his career when he plied his trade for Anderlecht and later West Brom, he still averaged 20 goals a season. Yet what’s been particularly impressive about Lukaku during his first year at Old Trafford is the manner in which he’s evolved both as a player and as a person and has continued to add to his game. In a United squad lacking many real leaders, a problem which is not at the mercy of Mourinho, Lukaku has proved himself as a leader of men and is becoming a figurehead for this side both on the pitch and off it, from his subtle yet strong criticism of some of the players in public, to impromptu team-talks, via his refusal to suffer fools and his quiet yet unstinting determination on the field. During the World Cup, there were many videos and images of Lukaku leading and motivating his Belgian team-mates throughout the ‘other Red Devils’ run to the last four.

During a widely-shared essay and video interview with The Players’ Tribune, Lukaku spoke inspiringly of overcoming poverty and racism. With his forthright nature and comfort leading the line, Lukaku looks absolutely like the natural heir to Ruud van Nistelrooy.

Yet maybe comfort is the wrong word. There is nothing complacent about Lukaku, such is his constant and innate desire to improve. Yet if improvement is to come, it must be encouraged through playing the kind of game that suits him. His leadership role is a real boon and alongside his self-assurance and natural authority, it’s marked him out as a Manchester United captain-in-waiting. He’s also reportedly giving extra coaching lessons to Marcus Rashford and Angel Gomes after training.

His lung-busting 50-yard burst to surge to the right-back position and dispossess Abdoulaye Doucoure and break up a dangerous Watford attack at the weekend epitomised the complete package that is Romelu Lukaku 2.0. His all-around game has come on leaps and bounds since he signed as an undoubtedly prolific but still rough-around-the-edges striker and Jose Mourinho deserves credit for that. There are many other in Red who would do well to follow our big number 9’s example when it comes to attitude, determination and giving 100% for the cause every week (looking at you Anthony Martial and Paul Pogba).

P.S. We discussed Lukaku’s leadership on this week’s podcast.