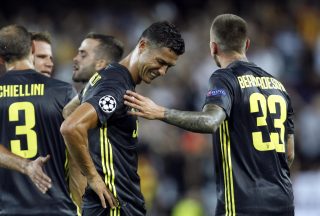 According to Paul Hirst of The Times, Cristiano Ronaldo will avoid further punishment following his sending off against Valencia in the Champions League meaning he will only get a one-match ban and will be available to play against former club Manchester United at Old Trafford.

The Juventus forward was shown his very first red card in Europe’s prestigious club competition after he appeared to pull the hair of defender Jeison Murillo.

Ronaldo was astonished at the decision to the point that he was even reduced to tears as his first return to Spain since his departure from Real Madrid turned sour.

Juve face United on October 23 and it was initially thought that Ronaldo would miss out, however, that no longer appears to be the case.

But this is word from Hirst of The Times. Ronaldo will find for definite on September 27, with the case to be dealt with “by the UEFA Control, Ethics and Disciplinary Body”.