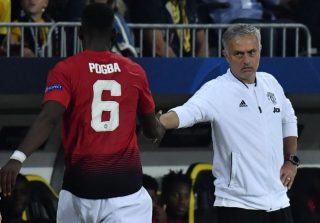 The United duo have been known not to be on the best of terms since last season by going public about their situation on a number of occasions.

It has even caused a divide amongst United supporters with some taking either side, while many couldn’t care less about who gets on with who, as long as the team is getting results.

But team morale is important to a team searching for success and it’s a relief to hear Mourinho is trying his best to settle tensions by sticking by Pogba, despite a number of unconvincing performance.

That wasn’t the case last night though when Pogba was handed the captain’s armband in Antonio Valencia absence before netting a first-half brace and helping United kickstart their Champions League campaign in a 3-0 win away to Swiss side Young Boys.

Have we turned a corner?

Anyhow, hopefully, this continues and their relationship improves. Everyone wants Mourinho and Pogba at their best.

A lot made of Mourinho’s (lack of) man-management in recent times.
The Pogba issue could have erupted this season.
There are clearly still issues, but Mourinho has been faultless in his treatment of him in the first weeks of the campaign #mufc