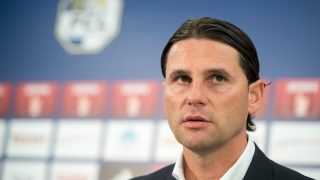 Manchester United will have to deal with an artificial pitch in their UEFA Champions League opener, but Young Boys manager Gerardo Seoane does not expect it to pose too many problems for Jose Mourinho’s men.

United will look to kick-off Group H with victory in Bern ahead of tougher challenges against Serie A giants Juventus and Spanish outfit Valencia.

But there is an element of Wednesday’s Champions League clash that could well prove tricky for the visitors, with the in-form Young Boys hoping to make a mark on their latest European venture.

However, Mourinho and his players have dealt with pitch issues over the years, particularly in the triumphant Europa League campaign of 2016/17, and the Swiss side’s manager does not expect it to throw off United.

“We can’t change the pitch,” head coach Seoane said on the eve of the game,” said Seoane, as per the Irish Examiner.

“It’s clear they are not used to pitches like this, so in the beginning I guess it will be a special feeling.

“But with training tonight (Tuesday) and the warm-up I think they will be all right.

“They have the quality, speed and technique to play on this pitch, so I don’t think it’s going to be a problem.”

The pitch shouldn’t be United’s biggest form. Last season, the Reds suffered a 1-0 defeat in Switzerland when faced against FC Basel.

“It would be nice if it continues,” Seoane said of the run. “But we focus on ourselves and of course we’re playing against a very good team.”

Watch our match preview with Full Time DEVILS below.