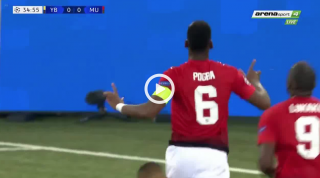 This is what we expected from Pogba after he won the World Cup this past summer.

While his overall performance leaves a lot to be desired, like most of his United teammates, Pogba was still capable of producing the goods.

The scoreline is currently 1-0 but Young Boys have looked more direct and threatening so far.

However, the 3G artificial pitch is certainly causing United problems.

Hopefully, this is a turning point for Pogba and he starts scoring important goals like that on a regular basis for United and not just France.

Mourinho may have been concerned before the goal, though he will be happy to see Pogba starting to sway around the pitch with an elegant swagger.

What a finish! Watch it below: