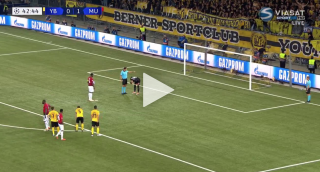 The Frenchman has responded to criticism brilliantly after being handed the captain’s armband for Wednesday night’s fixture following Antonio Valencia’s absence.

Young Boys will feel hard done by after the controversial penalty was given and they’ve been very impressive before the break, putting United under pressure a number of times.

They won’t believe they’re 2-0 down after playing so well, but this is the Champions League. Any lapse in concentration will be punished.

The scoreline is currently 2-0 at half-time. Manager Jose Mourinho will be very happy with that.