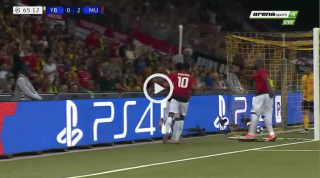 Anthony Martial scored his first goal of the season against Young Boys in the Champions League to hand Manchester United a three-goal cushion.

The Reds came out much stronger in the second half despite already having a two goal lead thanks to captain for the night Paul Pogba.

The Frenchman scored a first-half brace before being joined on the scoresheet by fellow France international Martial.

United had been struggling with the artificial pitch, but our quality has shined through against a decent Young Boys side, albeit one nowhere near our standards.

Martial’s effort on goal took a lucky deflecting into net, but we won’t complain. A goal is a goal…

Fans will be delighted if United can score more and put the sword to our Swiss opposition.

In other news, Cristiano Ronaldo will miss Juventus’ trip to Old Trafford after getting sent off against La Liga outfit Valencia in the other Group H match.

Hopefully, it’s only a tw0-match suspension and he can welcome United to Turin for the second game.