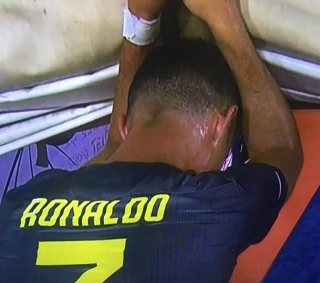 Cristiano Ronaldo has been sent off on his Champions League debut for Juventus against Valencia and will subsequently miss the Italian giants’ encounter with former club Manchester United.

Ronaldo joined Juventus from Real Madrid in July for £105 million, with Juventus hopeful he can propel them to Champions League glory just like he did with Los Blancos for three consecutive seasons.

He scored his first goal for Juve at the weekend against Sassuolo and was given the nod against Valencia this evening.

However, Ronaldo has been sent off following a clash with Valencia player Jeison Murillo.

The 33-year-old then broke into tears as he left the pitch, knowing he will now miss Juventus’ clash with United in the Champions League. The Portuguese now faces the prospect of a two-match ban.

Ronaldo was due to face his old side on October 23 but will now miss out.

Should UEFA hand Ronnie a three-match suspension, that would rule him out of both clashes against Jose Mourinho’s side.