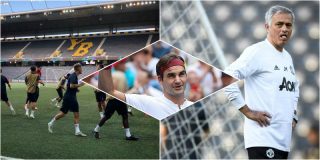 Jose Mourinho wants Manchester United’s players to follow tennis great Roger Federer’s lead and show their quality as they kick off their Champions League campaign on an artificial pitch.

Group stage debutants Young Boys could have an advantage as the Reds return to Switzerland, where we suffered a 1-0 loss against FC Basel a year ago.

Manager Jose Mourinho made the decision not to bring Antonio Valencia with the squad to Switzerland instead of risking the full-back on the Stade de Suisse surface.

READ MORE: Mourinho reveals why Valencia is not with the squad in Switzerland to face Young Boy

Mourinho has let his feelings known about such surfaces to European football’s governing body UEFA but was keen to stress that it should not be an excuse, instead pointing to one of Switzerland’s national treasures Federer’s versatility as inspiration.

“I don’t want to use that, especially before the match, as a possible excuse for a not very good performance,” Mourinho said of the pitch, as per BT Sport.

“Everybody knows it’s different but what I had to say I said last week in Geneva in the UEFA meeting that we had – and what can I say?

“I can get as an example, we are in Switzerland, the home of one of the best-ever tennis players, and I’m pretty sure that the big man sometimes is not happy to play on such a surface but he has to play and he has to win.

“Everybody knows that he has a favourite surface, but he has also to win on the surfaces that he is not in love with, so we have to do it.

“Valencia’s the only one that demanded (caution) from us, his situation, we need to protect his clinical situation. Apart from that, we go with everything we have, and we have to try to win.”

United players tested the pitch before training on the eve of the game, with coach Michael Carrick instructing the group to get a feel for the pitch with balls once the warn-up had concluded.

Moreover, here’s a video of Juan Mata and Ander Herrera meeting Federer in 2015: