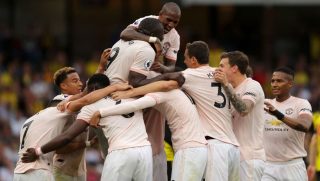 Chris Smalling believes Manchester United have turned a corner in the past few weeks in the Premier League after winning back-to-back games against Burnley and Watford at either side of the recent international break.

The Reds appeared to be in disarray following successive Premier League losses in August against Brighton and Tottenham, however, Mauricio Pochettino has since seen his players lose three consecutive games and the media seem a lot less critical of the Argentine coach.

Manager Jose Mourinho has already questioned the press on that.

Smalling got on the scoresheet to help United end Watford’s 100% start to the season with a 2-1 victory at Vicarage Road.

United will switch their focus on the Champions League on Wednesday night ahead of their group-stage opener away to Swiss side Young Boys.

Smalling believes the Reds have made big improvements over the past couple of weeks and have put their stuttering start behind them.

“I think it has definitely come together in the last couple of games,” Smalling told Manchester United’s official website.

“Obviously, Burnley was comfortable through the whole game; the first half [against Watford] was comfortable and the second was about digging in when we knew we weren’t always going to have it our own way, but all credit to all 11 players out there.”

Last time out in Switzerland, a year from now, United lost 1-0 to Basel. That will offer Young Boys belief of a potential upset.

Moreover, United haven’t won the Champions League since 2008 when Sir Alex Ferguson’s side beat Chelsea on penalties in Moscow.

The Reds reached the final again the following year but lost to Barcelona as they did again in 2011. We’re a long way off such heights now.