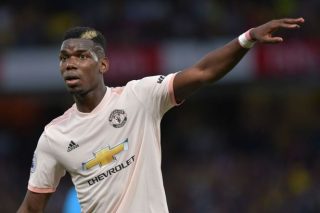 The Reds re-signed Pogba in 2016 after Mourinho sanctioned a £89 million swoop for the Juventus star.

Pogba helped United to win the Europa League and League Cup in his first season back at Old Trafford, but was unable to replicate such feats the following season as the Reds finished the season without a single trophy.

That prompted more criticism of Pogba – even some from his manager – raising questions about his future.

United faced reported interest from La Liga giants Barcelona and Juventus in Pogba this past summer, although the French star stayed put after winning the World Cup.

Pogba did better cutting in from the right side of midfield in United’s wins over Burnley and Watford in our last two Premier League fixtures.

“Listen, he’s got an ego, that’s not hard to see on social media, this boy’s got an ego, wants to be looked at and talked about as the best player,” Ferdinand told ESPN.

“There’s a hunger and desire for that, with that comes a work ethic. That’s down to Mourinho to work that out. And I think that’s been the problem so far, they’ve not been able to work out what’s best for Paul Pogba in the Man United team.

“Should he be playing in a more deeper, reserved position? Should he be playing on the edge of all the attacks, assisting, providing chances, etc? Where is he best in this team? I don’t think it’s in terms of players that you compare them, it’s the mentality side.

“And that’s where Cristiano Ronaldo beats down every player around. He’s an animal mentally. He’s just single-minded, fearless, and obsessed. Crazy combination.”

Over the past two seasons, Pogba has scored 17 goals in 93 games across all competitions. Mourinho will be hopeful he adds to that tonight in United’s Champions League opener against Swiss champions Young Boys.

The Reds are currently positioned in eight-place in the Premier League table and face Wolves this weekend.