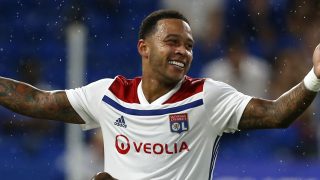 Depay, purchased by Louis van Gaal in 2015 from boyhood club PSV in a £27.9 million deal, had a frustrating 19 months at United – scoring seven goals and creating six assists in 53 appearances.

Jose Mourinho’s arrival ensured fewer minutes for Depay and he made just four league appearances before making a January switch to Ligue 1 outfit Lyon for £21.7 million.

Although United worked with a loss, Depay was underperforming to a degree we wouldn’t have got more money from another club.

Since moving to Lyon, who face Manchester City in the Champions League on Wednesday, Depay has been a first-team regular – scoring 28 goals in 74 appearances.

“Everybody knows the story of me and Manchester United was not successful and I’m just happy that I’m the player I am today,” said the Netherlands international, as per Sky Sports.

“I can look back and say I didn’t want it to go like that – nobody wanted that – things happened and I became a much better player. I can feel it in the games, I mean everybody can see it I think as well.

“After one season, I couldn’t find myself in the team. I was still young, didn’t get a lot of opportunities, but I must say that the first season I didn’t put the quality on the table that I thought.

“I believe for sure that the city is still Red and tomorrow I’ll be trying to get a good result against the Blues.”

United’s all-time leading scorer Wayne Rooney, speaking last week, revealed Depay went against his words of advice while in Manchester – turning up to a reserve game in his Rolls Royce, wearing a cowboy hat and red leather jacket following a poor performance against Stoke when he contributed to one of the Potters’ goals through a costly mistake.

Depay, however, took the comments in his stride and revealed he was confused by one aspect of Rooney’s account.

“Some people can’t take a joke and me and Wayne are very good friends,” he said. “I understand what he meant with it and that’s it.

“It’s in the past and I’m a flamboyant guy and like nice stuff but that doesn’t mean I couldn’t be more smart. I’ve become more mature.

“You go through experiences in life on and off the pitch. When I came back today [to Manchester] I felt like a different person.”