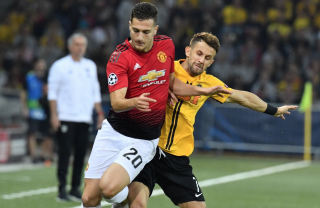 De Gea – 6 – Starting to look his assured self again in recent weeks. Dealt expertly with anything that came at him during the early onslaught from the hosts.

Dalot – 7 – Bar one slip in the first half that gifted the Swiss side a big opening, this was an extremely assured debut for the young Portuguese full back. Looks to get forward and can clearly cross the ball, something that Valencia is lacking. Likely to get another 90 mins against Derby on Tuesday.

Smalling – 7 – Looking like United’s most accomplished centre half at the moment. Followed on from his excellent display at Watford with another solid display tonight. One goal saving block in the first half.

Lindelof – 6 – The Swede did nothing wrong and wasn’t exposed, however, doesn’t bread confidence into those around him, and still seems vulnerable. Is he capable of starting week in week out for United? The jury is still out.

Shaw – 6 – Never troubled by the opposition defensively, however, didn’t get forward and join the attack as he has in recent weeks. Let’s hope this is down to his lack of preparation this week following his concussion for England and that he can get back to his marauding best at Old Trafford on Saturday.

Fred – 5- The Brazilian was yet again anonymous and let the game pass him by. Still can’t quite see what type of midfielder Fred is, but he needs time to adapt.

Pogba – 7 – This may seem a harsh rating, due to the fact he scored a truly sublime goal to put us ahead, just before doubling the sides lead minutes later from the spot. However, you still feel the Frenchman can offer much more and didn’t dominate the game in the manner in which he’s capable of.

Matic – 6 – Solid and no thrills from the Serb. Calm and collected in possession, which will be key for United in this competition. Will now sit out the game Saturday due to suspension.

Martial – 7 – Cut a disinterested figure during the first half, looking anything but a player trying to force his way into the manager’s plans. The second half was a completely different story for the winger who showed what United fans know he is capable of. A much needed goal for his confidence.

Lukaku – 6 – The big Belgian is in fantastic form and would’ve loved to have continued his goal scoring form. However, it just wasn’t his night and struggled to make an impact. Disallowed goal in injury time.

Rashford – 4 – Excellent for England last week, with pundits criticising Jose for the lack of game time he is giving the youngster. However, the fact of the matter is, he hasn’t performed well in a United shirt for some time and tonight was no different. Wasteful in possession and no cutting edge.

Fellaini – 6- Rested tonight after a superb performance at the weekend. Was a physical presence brought on to see out the game. Did his job well.

Mata – 6 – struggled for game time recently and did his best to get on the ball. Unlucky not to score from Shaw’s cross.

Perreira – 6 – hasn’t been in a Matchday squad since being hauled off at half-time against Brighton. Showed some very neat and tidy passes against the Swiss and used the ball well.