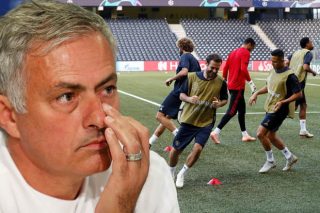 The Champions League kicks off for real this evening, as Manchester United travel to the land of cheese and ski’s to face off against Young Boys of Berne. Billed as the whipping boys of the group, Jose Mourinho will be heading out to Switzerland with high hopes of kicking things off convincingly and with a marker laid down. But what can we expect for this evening’s game? Let’s find out.

With Antonio Valencia absent due to the stresses and strains of the pitch out in Switzerland (we’ll come onto that later), Diogo Dalot has the perfect opportunity to show his credentials for the first time since his move in the summer. Injury has hampered his progression, but with Under 23 football to his name and seemingly at full fitness the young man has the chance to give fans a glimpse of his abilities.

With the pressure diluted against a side United should dispatch with relative ease (should being the operative), can Dalot push for more senior opportunities on the back of an impressive showing tonight?

Rashford and Martial to shine?

Where to start with these two? Frustration is just the tip of the iceberg. However, Marcus Rashford looked the part for England during the internationals, and with two games remaining of his domestic ban, tonight looks the ideal opportunity for him to keep some form going during a period where he won’t be getting game time. A player of his ability should find tonight a happy hunting ground. Which brings us nicely on to Anthony Martial, a man who apparently has a real gripe with Mourinho, his form hasn’t warranted the support he has gained from supporters. Out of sorts against Watford in his latest cameo, he needs a confidence boost and something like a performance.

Who better to pray upon than the minnows from Switzerland?

Artificial havoc on the plastic grass?

The modern football pitch is a thing of beauty. A carpet like surface that enables magicians to perform seamlessly. All very true, but an artificial surface is a completely different playing field (if you’ll excuse the pun).

The bounce is harder as the surface is more robust, the impact on players knees, ankles, hips can be fatal (hence the omission of Valencia) and the surface is slicker, and quicker which is something that can take getting used to. The home side have a massive advantage due to playing on it week in, week out and the first 20 minutes could see this show itself as United adapt. Do they have enough about themselves to see it through? Should it make much of a difference to the undoubted array of talent that will surely be involved?