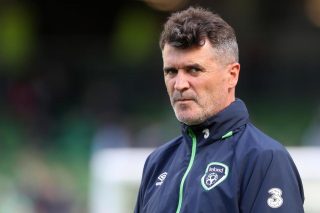 Who knew, eh? Who knew that when Roy Keane first grew his Captain Haddock beard all those years ago, he would eventually transform into a cartoonish tertiary villain with anger issues. The figure of fun who is thwarted every episode.

Who knew? Apart from everyone who has met, worked with or even watched him on television for more than five minutes of course.

It should, therefore, be no surprise what we saw when Burnley and Republic of Ireland player Steven Ward´s WhatsApp messages were leaked. Once again we were shown Keane, the cartoonish parody of an angry man. Always a second away from volcanic eruption. Keane´s X-rated verbal tirades at several Irish players was only one, in a long line of irascible, irrational outbursts through the years. A vivid illustration of a psychotic pattern of behaviour of a man in love with football, yet bitter and resentful about everything in it.

An intractable nutcase, entirely unable to see his own flaws and unable to speak to people like a well-rounded adult. Anything he perceives as weakness means a man is soft and must be shouted and swore at aggressively as possible. If it doesn’t work: Shout more, swear more and be more aggressive, he’ll either “man up” or fuck off. These days they just switch off.

In some ways, it’s a sad demise for a man who is arguably Ireland’s greatest footballer and one of the finest midfielders these sceptic isles have ever seen.

Keane was a force of nature as a player. The planet-sized chip on his shoulder gave Keane a relentless drive that swarmed all over the minds of opponents like a nest of furious hornets. It was a mindset that willed him onto heights that his natural gifts – or lack thereof – would not ordinarily have allowed. Snapping, snarling, chasing and raging. An unyielding, ruthless bastard of a player and a mass of contradictions. He simultaneously inspired and alienated all he worked with.

Unfortunately, when it became time for Keane the player to transition to Keane the Manager; Keane the Coach and Keane the human being. There was no switch. Roy Keane the man and the persona were one-in-the-same the entire time. Which meant Keane kept raging and fighting in an empty room. He continues to grind axes, hold pointless grudges carry chips on his shoulder and have no sense of irony. If he had the latter, he wouldn’t be accusing a player of faking an injury, something he, himself exploded about at the 2002 World Cup when accused of the same thing. Nevertheless, here we are, with Roy Keane allegedly goading Jon Walters and calling Harry Arter a “fucking prick.”

It’s hard to even grasp whether Keane’s style would have even worked as a player today. Not because players are “soft” – so often the cry of knuckle-dragging Neanderthals the world over – but because people realise they don’t have to take shit anymore. Modern players aren’t refusing to play through injuries because they aren’t up to it. They are taking the sensible, grown-up decision to take care of themselves, so they can have a healthy and happy retirement and be able to play with their kids and have a fulfilling life off the field.

By his own admission, Keane didn’t look after his body as well as he should. Why would he? He was the last generation of old school footballers. Players who drank heavily and threw themselves into the physicality no matter what the cost. Admirable in some respects but largely idiotic and self-destructive in the long run.

Keane’s way of doing things will still be heralded by some, especially by his biggest fans in Ireland and Manchester. A combination of demi-god status and the pungent aroma of toxic masculinity still give Keane clout with some fans out there. The kind of people who hate modern football, while watching a third Premier League match of the day on Galactic, fifth dimensional, high definition and balancing a cider on their third belly. Men who reminisce about the days when football was played on a muddy bog in Skelmersdale by 17 men in boiler suits and snowshoes, kicking a papier-mache cow’s head between goalposts made of coats and traffic cones.

The rather rudimentary man-management approach of Keane and his superior, Martin O’Neill, may have worked decades ago when it was deemed acceptable to be spoken to like an errant piece of sewer waste at work. However, we’re all now beginning to know better and that Keane’s abrasive, conflict as a first and last resort is not okay or effective.

The result is Keane becoming a cartoon character. Exploding into bouts of fury over minor things such as a player with a thigh strain, not training or too much milk in a cup of tea. His volatile temperament has become the source of jovial, mocking anecdotes by former teammates. Keane the player has become Keane the punchline, a man left behind by a sport, slowly but surely evolving into the 21st century.

Rather than evolving into a great coach he has become what he always hated: An expensive entertainer, paid big bucks to say shocking things on television for some cheap heat. As is always the case with the perennially angry Corkman, he only has himself to blame.