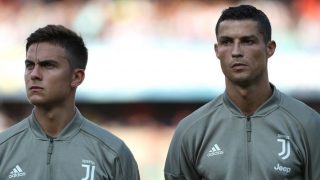 Cristiano Ronaldo is reportedly keen on Juventus striking a deal that could give Manchester United a major boost amid links with Paulo Dybala.

It’s being claimed the former United star wants Juve to offer Dybala to his old club in a swap deal for midfielder Paul Pogba.

That’s according to Spanish outlet Don Balon, with similar stories emerging as Dybala has also been linked with United’s domestic rivals Chelsea, as per the Daily Mirror.

The latest is that the Portuguese would support such a deal as he doesn’t want the added competition from Dybala up front, while he’s apparently eager to play with Pogba in midfield behind him, cite Don Balon.

A rather selfish mindset from Ronaldo but certainly a believable one.

With so many attacking players struggling to deliver under the current regime – Alexis Sanchez, Marcus Rashford and Anthony Martial – it would be a risk bringing Dybala in and expecting the goods right away.

Dybala looks an incredible talent and everyone questioned why Jorge Sampaoli didn’t make use of him at the World Cup this past summer after taking him as part of his 23-man Argentina squad.

Of course, at the age of 24 and competing with some of the world’s best attacking players, Dybala must be patient and wait for his opportunity. However, his chances would increase if he was playing more regularly for a club like United.

As for Pogba… where to start? The France international hasn’t properly settled in since joining United in 2016 and Don Balon claim he wouldn’t be against a return to Turin after Juve’s recent improvement and statement of intent after signing Ronaldo from Real Madrid.