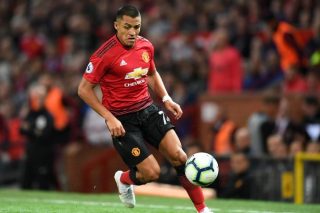 Manchester United defeated Watford 2-1 at Vicarage Road on Saturday and questions about Alexis Sanchez are being asked more frequently than ever.

The headline grabbers should be Romelu Lukaku and Chris Smalling, who both scored to grant United all three points and put an end to Watford’s perfect start to the new Premier League. Prior to the game, Javi Gracia’s men had won their opening four games, including a comeback win over Tottenham Hotspur.

Jose Mourinho, on the other hand, would have been delighted to see such brilliant attacking football and character shown by his players, particularly in the first-half before United took their foot off the gas and allowed the Hornets back into the game.

In his post-match press conference, Mourinho said he was happy with all of his players as they are finally showing what makes them different. He also said that he loved the attitude displayed by most of his senior players with a notable mention for Lukaku, who made efforts to track back into full-back positions to help his teammates out whilst Watford piled the pressure on.

One player Mourinho probably expects more from is Alexis Sanchez, although for no lack of trying. After arriving from Arsenal in January in exchange of Henrikh Mkhitaryan, the forward has failed to replicate his prime form that was evident at The Emirates where the vast majority of his teammates were mediocre and unable to make an impact in elite competitions such as the Champions League and Premier League.

In many ways, Sanchez was like a lost puppy at Arsenal and deserved better. The opportunity to join United saw him snub former manager Pep Guardiola at Manchester City because we were more appealing in his eyes, despite the Bitters being on course to win the title.

Perhaps that’s what makes me defensive when it comes to Sanchez. He dropped a chance to win his first Premier League medal knowing we were miles off the pace.

While it’s clearly not clicking for the Chile international at United, his intentions are in the right place. I have been critical of the Reds going forward for years now and finally, effective or not yet, we have a player prepared to take risks.

Sanchez has one objective when he receives the ball and it’s not to backtrack or play it safe. He turns with the ball and drives forward regardless of who is in his way. That’s an admirable trait and I truly believe it’s only a matter of time before things come together for him.

Moreover, United’s style of play is very different to that of Arsenal under Arsene Wenger when Sanchez was still their player. A lot more conservative. Wenger argubly built his team around the Chilean and he was given more service to rack up impressive tallies for a wide player most seasons.

There have been calls to see Anthony Martial replace Sanchez on the left for United, backed up by convincing stats, though sometimes the naked eye has a greater influence than a couple of numbers thrown together in a tweet.

What needs to change for United to get the most out of Sanchez? 🇾🇪#mufc pic.twitter.com/sgeUt8hKGV

Unlike Sanchez, Martial doesn’t look like he wants to be a United player and I don’t think his form warrants a starting place of a player with clear intentions to hurt teams. Sometimes you need to sit tight with top players when they hit a dry spell.

Also, we shouldn’t forget Sanchez recently announced a split from long-term girlfriend Mayte Rodriguez, which could potentially have a lasting downbeat effect on the player. These situations are never easy and people tend to forget that when talking about footballers. You know, they’re human too.

In the end, I think a bit of extra patience on our behalf will be worth it. Get behind Sanchez!