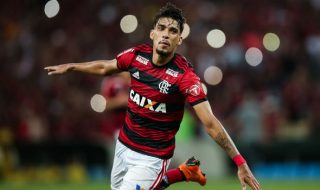 Manager Jose Mourinho made it clear last summer that he was looking to add more of a Brazilian influence to his side before signing midfielder Fred from Shakhtar Donetsk and welcoming Andreas Pereira back into the squad following his loan spell at La Liga giants Valencia.

According to Le10 Sport (via Tom Coast at Sport Witness), the Reds have joined rivals Liverpool, Manchester City and Paris Saint-Germain in the race for the 21-year-old talent.

It remains unclear how much interest United hold, or whether big clubs are being use to help secure the youngster a new and improved contract at Flamengo, as per Coast.

Joaquim Piera at Spanish outlet Sport also claims that Barcelona are keen on a move for the midfielder.

The Brazilian’s contract expires in December 2020 and Bleacher Report claim he has a release clause of €50 million.

At the tender age of 21, Paqueta is already considered a key player for Flamengo. He recently made his senior Brazil debut in the 2-0 friendly win over the United States.

Lucas Paquetá has that killer pass in him, the type of wonderful through balls that put the striker in a 1v1 situation with the goalie. He will still develop it and get even better. Love these passes that Ganso (Santos), Kaká etc would all play. He’s that type of midfielder.