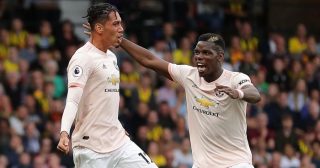 Chris Smalling aims to turn his World Cup disappointment into a positive by re-establishing himself in the heart of Manchester United’s defence.

The defender, who has 31 caps to his name, was axed from the England squad by manager Gareth Southgate in the build-up to the summer’s World Cup in Russia and has been overlooked for games against Spain and Switzerland this season.

He was also left out by Jose Mourinho for United’s opening two games of the season but the 28-year-old has worked his way back into the line-up and, following Saturday’s excellent performance away to Watford, it will take something special to see him replaced.

Smalling even scored a spectacular volley in the 2-1 win over the Hornets at Vicarage Road.

“It’s obviously difficult [watching the World Cup], I am not going to lie,” Smalling told ESPN.

“It was a difficult time but you have to try and take the positives.”

Sources close to Southgate claim the Three Lions boss prefers defenders who are more comfortable on the ball than Smalling, though you won’t see many scoring volleys like the former Fulham defender.

Serbia international Nemanja Matic admitted to being “surprised” after the game at Watford that Smalling did not go to the World Cup after playing close to 50 games for United last season.

Smalling states that his focus is now on his club career, perhaps accepting that he’s not part of Southgate’s plans.

“I haven’t had any discussions [with Southgate] but I am lucky I play for a top club and we have got lots of games and that’s where all my focus is going to be now because Man United is my sole focus right now,” he said.

Smalling is part of the United squad flying to Switzerland for our Champions League opener against Young Boys.