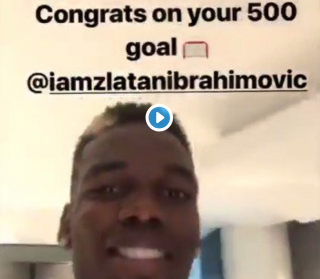 Former Manchester United striker Zlatan Ibrahimovic is renowned for scoring incredible goals. From overhead kicks outside the box to incredible volleys, the Swede has all kinds to skills in his locker.

Even at 36, the LA Galaxy star is still scoring fantastic goals that will have you wonder what would have been if he didn’t pick up that knee injury in his first season at Old Trafford.

He scored another brilliant foal as he somehow swivelled to find the net in a 5-3 defeat against Toronto.

Zlatan was congratulated by many top players and our midfielder Paul Pogba wasn’t far behind.

The Frenchman was sporting an LA Galaxy jersey and was imitating Zlatan’s finish. Pogba then started referencing great martial arts artists such as Jet Li, Jackie Chan and Bruce Lee.

We can only imagine what losing such a big personality as Zlatan does to a dressing room, but United had no other choice but to let the former Sweden international go.

Things would have been a lot different had he not picked up *that* knee injury.