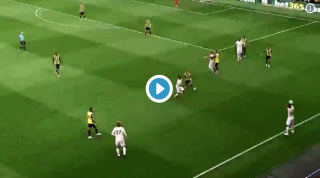 Paul Pogba could have scored twice in a consistent and progressive first-half but like the rest of his teammates, the Frenchman regressed after the break into cruise control and became careless.

Though one Twitter user under the anonymity @HS_10Ftbl has captured Pogba’s best parts from the 2-1 win over Watford in a video which lasts over 2 minutes long.

It shows Pogba’s incredible passing range throughout and his ability to pick out defensive splitting through balls. There can be no doubt that assists will come his way if he continues doing that.

READ MORE: Man Utd and Liverpool dominate BBC Team of the Week while Chelsea have one star inclusion

This also comes after a flurry of negativity surrounding the former Juventus midfielder, who is being heavily linked with moves to Spain and back to Italy.

It has come to the attention of United fans that Pogba performs more consistently for France than he does United and that is an issue that needs to be addressed. Manager Jose Mourinho will certainly try to get the best out of him, but you can only lead a horse to water. You can’t force them to drink it.

However, for United’s sake we need to get the best from Pogba, He’s got incredible ability and enough to become the very best. It’s a matter of lacking real consistency at this stage of his career.