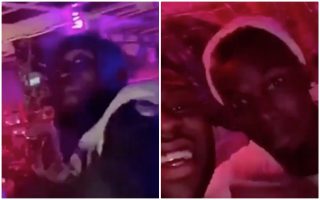 Manchester United have secured back-to-back wins for the first time in the Premier League this season and so with the pressure off, for now, some of the lads have rightly taken the chance to enjoy themselves.

The Reds were undoubtedly struggling a few weeks ago after consecutive defeats to Brighton and Tottenham and things were looking bleak for Jose Mourinho and his players.

To their credit, United have bounced back with wins over Burnley and Watford, the latter who went into Saturday’s game with four wins from four. They will be hoping that they can now kick on and compete on various fronts this season.

READ MORE: Man Utd and Liverpool dominate BBC Team of the Week while Chelsea have one star inclusion

Next up is a Champions League clash against Swiss side Young Boys on Wednesday night.

Following the win over Watford though, Paul Pogba, Romelu Lukaku, Eric Bailly, Anthony Martial, Victor Lindelof and Marouane Fellaini were amongst those who hit the town to show spirits are currently high in the United camp.

Check out the videos below: