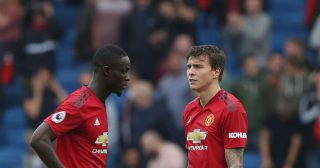 Manchester United defender Eric Bailly is reportedly “ready to quit” the club in January after falling down Jose Mourinho’s pecking order with rivals Arsenal and Tottenham Hotspur said to be interested.

The Mirror’s John Cross reported Bailly could look for the exit after he was dropped for the recent defeat to Spurs and only featured as a late substitute in United’s last two league games against Burnley and Watford.

This isn’t the first time Mourinho has demoted the Ivory Coast international but after giving away the penalty for Pascal Gross to convert Brighton’s third in a 3-2 defeat to the Seagulls in August, Bailly has yet to start a game.

Bailly, 24, joined the club in 2016 as Mourinho’s first signing at United and experienced a downturn in form last season.

Manchester Evening News journalist Samuel Luckhurst has argued that dropping Bailly was one of several bad decisions made this season.

What was on Mourinho last night was Herrera in defence, dropping Bailly altogether for accident-prone alternatives and crushing Lindelof’s confidence. #mufc have paid the price for tolerating mediocrity and not being aggressive enough in the market.

Arsenal signed Sokratis Papastathopoulos, 30, from Borussia Dortmund during the summer to improve their defence while Spurs became the first Premier League team not to complete a signing since the summer transfer window was introduced.

But Cross believes that Mauricio Pochettino is a fan of former Villarreal defender Bailly, as he’s familiar with the player from his time in Spain. He joined Espanyol’s academy in 2011, just prior to Pochettino’s last season managing the team, but it’s possible he’s kept an eye on him, ever since.