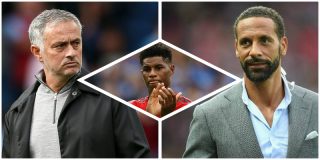 Manchester United legend Rio Ferdinand says manager Jose Mourinho is wasting his breath reading numbers out in his press conference to show that Marcus Rashford is still getting plenty of game time.

Ferdinand is concerned the equation is much simpler than that and Rashford must be trusted to start games.

“I remember watching him at Celta Vigo in the Europa League,” said the BT Sport pundit.

“He was like Roy of the Rovers, 19 years old, taking free-kicks and corners and the lot.

“That is what I loved about I’m when he first came in. There was a single-mindedness, a young kid, with no fear, playing football for Manchester United, the team he supported as a boy.

According to the Daily Star, it is now 31 games for club an country in a run stretching back to the game against Huddersfield last October since Rashford has scored after coming on from the bench.

“He used to come on in games and terrorise and frighten the life out of people,” Ferdinand said.

“I think he is coming on and trying to please everyone. He might be confused on what the manager wants. It doesn’t seem that there is same spark. Where’s that fearlessness that there was before?

“Back in the day, he went straight for the jugular. Now, he takes his time a little bit more, he is not as assertive.

“There are little details that need to be reintroduced to Marcus, to get back to that fearless, explosive, scary footballer that came on the scene a couple years ago.”

With the Champions League back this week and Rashford suspension ruling him out of the next two Premier League games, Mourinho can play the England forward and make sure he remains on top on his minutes.

Can see United making a couple of changes vs Young Boys with Luke Shaw already a confirmed starter. Antonio Valencia travelled for just one away game in group stages last season so Ashley Young could move over to right-back. Marcus Rashford needs minutes given domestic ban #mufc

But Ferdinand says the occasional run-out will not cure the ongoing problem.

“If you talk about all the best players that come through – Michael Owen, Cesc Fabregas, Frank Lampard, Steven Gerrard, Kylian Mbappe now, Wayne Rooney back in the day… Those players played every game, straight away,” he said.

“They start every game which then breeds confidence.

“Rashford came into the team and everyone was talking about him – and rightly so – like he was the next best thing in England, saying we haven’t had a player like this since Rooney – what a talent.

“And that was right, because he was doing things and we were thinking ‘wow, great attitude, great mentality, temperament, the lot, aligned to his skill.

“That’s a signal from the manager that says: ‘You are my player, you are my man. I believe in you. You might have had dicky spells here and there but you are young and I will see you through this.’

“You can bring me all the minutes in the world, I don’t care. I can come on 10 minutes every game.

“But I want to walk out on that pitch as the starter. When I am on the bench I know where I stand. I ain’t obviously one of your main guys.”

“So I think Mourinho maybe has to take responsibility.”

Let us know in the comments section if you agree with Ferdinand?