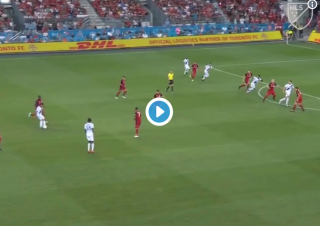 Ibrahimovic left United in March to sign for LA Galaxy and has scored 17 goals in just 22 appearances for his new side.

And his goal against Toronto FC took his career tally to 500 goals – which includes the 29 he scored during his time at Old Trafford.

The former Sweden international netted 156 goals for Paris Saint-Germain, 66 for Inter Milan, 56 for AC Milan and 22 for Barcelona.

On the international stage, Ibrahimovic scored 62 times for Sweden.

It was fitting that his 500th goal involved a ridiculous piece of skill. Galaxy were trailing 3-0 as half-time approached before a free-kick found him in the penalty area.

Spinning, he hooked a backheeled volley onto the post and past the goalkeeper.

However, Galaxy still went on to lose 5-3, but the game will be remembered for Ibrahimovic’s landmark moment.

He joins Lionel Messi and Cristiano Ronaldo as the only players currently playing to have achieved the feat of scoring 500 goals in their career.