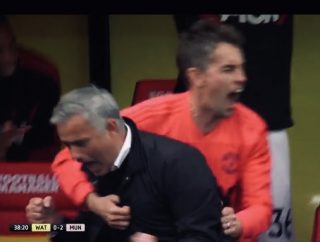 Jose Mourinho revealed Chris Smalling’s decisive goal against Watford on Saturday was the result of a carefully orchestrated set-piece routine.

The Manchester United defender put in an incredible shift for the Reds as he doubled their advantage at Vicarage Road, expertly controlling Marouane Fellaini’s header and slamming an exquisite volley past Ben Foster inside the penalty area.

Mourinho leapt from the bench to celebrate Smalling’s finish and embraced United assistant Kieran McKenna in front of a beaming Michael Carrick, both of whom were promoted to the first-team following the departure of Rui Faria after last season.

Explaining the celebration, Mourinho said, as per The Metro: ‘Because we trained with corner during the week, the best thing that can happen to coaches is you train and you see it happen in the match.

‘And they are happening even in these last few matches, even in the one against Tottenham, are happeing things that are working, the positional, the movement.

‘So when it happens was happiness for coaching staff.’

This is promising news. Hopefully, McKenna and Carrick can keep up the brilliant work and help transform Mourinho’s style as a manager.

Has Kieran McKenna been working on corners with United? Much better today and celebration with José after Smalling’s goal had me consider that. Highly-rated coach.