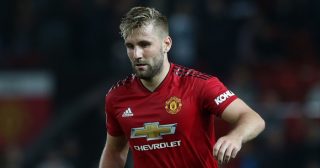 Jose Mourinho has stated that Luke Shaw will return to the squad against Young Boys in the Champions League on Wednesday.

The 23-year-old returned to club duty and full training on Friday, however, he was not selected for United’s trip to Vicarage Road on Saturday, with Ashley Young filling in at left-back to get his first start of the new season.

As predicted on Stretty News this week, the Reds went on to secure a 2-1 victory over Watford, who had a perfect record in the Premier League before the game from four games. Two first-half goals from Romelu Lukaku and Chris Smalling gave United all three points.

Shaw had been ever-present for Mourinho’s men at the start of the campaign, nailing down the left-back spot and getting recalled to the England squad.

Unfortunately, his momentum may have been stalled somewhat by his latest injury setback, but Mourinho revealed on Saturday that he plans to throw the Englishman straight back into action on Wednesday night against Swiss side Young Boys.

As per Sky Sports, Mourinho told reporters post-match on Saturday: “Luke Shaw plays Wednesday. We can’t do it with one left-back and Ashley Young is not just a left-back, he is also a right-back.”

The Portuguese then stated how Young and Shaw are both vital components of his squad going forward despite both vying for the same position, before also adding that Matteo Darmian will have a role to play as well.

“They are both doing well,” Mourinho continued. “They are both different players and I think they both understand that one is a young player and the other is the experienced one and it is good for us to have these two options, plus Darmian.

“He is my emergency man, he is always ready for everything.”