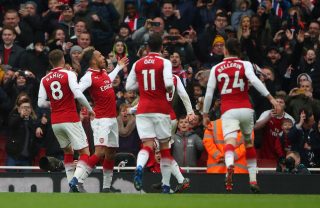 Manchester United are reportedly ready to reignite their interest in Mesut Ozil and may even make a move for the Arsenal star in January.

The Reds were strongly linked with a move for the playmaker over the summer, while new Gunners boss Unai Emery recently told the player that he needed to justify his £350,000-a-week wages.

Emery then denied a rift with Ozil but admitted that he wanted to see more from his highest-paid player, who still has another two-and-a-half years on his current contract.

Ozil clearly listened to his manager after he scored what turned out to be Arsenal’s winner as they saw off Newcastle in a 2-1 win at St. James’ Park on Saturday.

Jose Mourinho was allegedly keeping tabs on the 29-year-old last season and the Sunday Express claims that the Reds’ boss is still keen on Ozil, who he developed a strong bond with while at Real Madrid.

Mourinho was left angered with the club’s board over missing out on several targets over the summer and it is thought United are ready to provide him with January funds to boost his squad.

Let us know what you think by voting in the poll below.