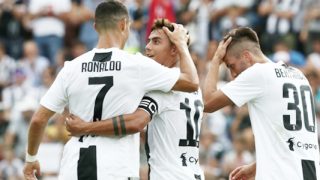 Juventus are reportedly prepared to offer Paulo Dybala to Manchester United as a makeweight in a £150 million return for midfielder Paul Pogba.

The Argentine forward, valued at approximately £100 million, has struggled to keep his place in Massimiliano Allegri’s side since the arrival of Cristiano Ronaldo from Real Madrid this summer.

Moreover, Dybala doesn’t get much of a look in with the Argentina national team which surprised many this past summer at the World Cup in Russia, when things went pear-shaped for the two-time world champions.

READ MORE: Pirlo talks up Juventus return for Pogba, but would Serie A giants be making a mistake?

According to the Sunday Mirror, he could be used as a sweetener to bring France star Pogba back to Turin – potentially as early as January.

Serie A champions Juve are keen for Pogba to return to them just two years after he went back to Old Trafford in a then-world record £89 million deal. Even though the Frenchman has failed to perform consistently for the Reds, the club will still expect to make a profit from selling him on again.

Pogba’s fall-out with manager Jose Mourinho has made matters worse and his performances for United are telling on that note. He was also linked with a move to Barcelona over the summer, as per the Daily Star.

But a potential swap-plus £50 million deal could suit everyone concerned with United getting a creative force and a goalscorer in 24-year-old Dybala.

Last season, the Argentine scored 26 goals for Juve but has started just one match for them in the Serie A so far this term.

Pogba excelled in Italy previously, winning the Scudetto in all four of his seasons there, but has been unable to replicate that under Mourinho at United.