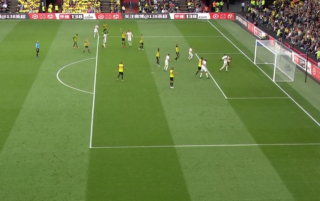 Man United and Belgium forward Romelu Lukaku got the slightest of touches on an Ashley Young cross to give the Red Devils the lead against Watford this evening.

The former Everton and Chelsea man scored his fourth goal of the campaign, as he edged Young’s cross towards goal with his stomach to give United the first goal of the match against the Hornets.

United fans will be glad to see Lukaku continue his rich vein for form, as the Belgian has now scored against Burnley, Brighton and now Watford already this year.

Here’s a clip of Lukaku’s goal. One of the weirdest finishes you’ll see from a United player for a long time!

Not often you see a good tummy finish! #lukaku pic.twitter.com/UPVwKKPIFd