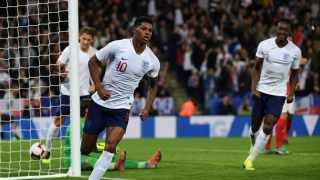 Marcus Rashford scored both England goals on this international break. His performances raise several questions. For instance, is the young winger becoming the Three Lions’ Lukas Podolski? Will he continue to be a spark for England but mostly a dud with Manchester United? No one’s thinking about such questions because international football’s far less important in England than the club game.

Instead, his productivity in the national set-up sheds a harsh light on Mourinho’s man-management skills with young, talented, attacking players. Does the manager find the same faults with the youngster he does with Anthony Martial and did with Luke Shaw but know better than to subject a local boy to harsher treatment? Is he misusing Rashford? Does Rashford not fit his system? What’s the deal?

The Standard’s James Robson tweeted his opinion: “Not surprising to see Rashford is the subject of debate after England performances. Mourinho has nurtured him since taking over at #mufc – played him more than any outfield player last season and handed him the No10 shirt. Hardly a talent being squandered.”

Old Twitter largely agreed with Robson; Mourinho isn’t to blame. Without a drone equipped with high-powered surveillance devices enabling us to eavesdrop on training sessions, it’s difficult to dismiss that consensus.

With Manchester United, Rashford’s played frequently, if not consistently. He’s been given the no.10 shirt although its recent history while on Zlatan Ibrahimovic and Wayne Rooney’s backs is more concerning than inspiring. While wearing it, Rashford hasn’t produced.

With England, he’s also played frequently, if not consistently. He won’t be given the no.10 shirt while Harry Kane’s around, but he’s produced.

The comparison brings us to a fork in the road. We can choose to be superstitious, blame the shirt and start a petition to give Rashford another number, or we can look for more rational reasons and solutions. Petitions are useless. Colombia gathered how many hundred thousand signatures to force a replay with England and where did it get them? Let’s go in the rational direction.

Subtle differences exist between England and United’s set-ups. Gareth Southgate tends to pick a more balanced squad than Jose Mourinho. The Three Lions boast players who can slot in across the final third. The Red Devils desperately need a right wing. They haven’t signed one in years.

Rashford’s been quoted as wanting what Anthony Martial wanted: an opportunity to play the no.9. Romelu Lukaku occupies the role, however, like Harry Kane does despite wearing the number ten shirt for England. The Belgian’s just as intractable, barring injury.

Rashford’s honed his talent for streaking down the left flank, beating defenders to the end line, then either crossing or cutting the ball back for teammates filling the box. The odd thing is, he’s not left-footed. He should be able to do the same on the right flank with even greater success.

He’s begun to cut inside onto his right foot more often when deployed on the left, but Alexis Sanchez and Martial already provide that option. There’s little benefit in Rashford becoming proficient as an inverted winger, as well.

Mourinho has faults. Tactical acumen’s not among them. Surely, he considered the idea before he opted to offer Jesse Lingard an opportunity to make the right wing his. Another hometown lad, Lingard doesn’t have Rashford’s natural talent but makes up for it with maturity. Versatility allows him to slot in behind Lukaku when United changes its formation, too.

Neither player’s broken his duck, this campaign. Lingard will have three more chances to make his role starting role permanent before Rashford’s ban for his foolish retaliation towards Burnley’s Phil Bardsley ends. If Lingard doesn’t take those opportunities, Mourinho should give Rashford a go. His talent, if not his temperament, demands it.