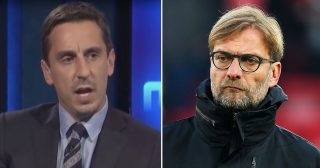 Most Liverpool fans nowadays have no idea what it feels like to achieve such a feat, but they can track exactly how long it’s been with the help of this wonderful website: http://sinceliverpoollastwonatrophy.co.uk/league-title

Liverpool have started the season superbly, recording four consecutive wins to take them to the top of the table, conceding just one goal so far.

But a hectic month awaits them with two Champions League matches against Paris Saint-Germain and Napoli to be played, as well as five games across other competitions between September 15 and October 7.

Last season, Klopp brought his side to the Champions League final in Kiev before losing 3-1 to Real Madrid.

However, Neville believes the Scousers should forgo a genuine attempt to win the Champions League in favour of a first league title in 29 years.

In an interview with The Times, Neville said: “The Champions League – if I was Liverpool, I would kick it into touch.

“I know that’s very hard to do but if they go into February, March, April without it, I think they could have a real chance if they had free weeks.

“Why? I think their method is exhausting for the front three [Mohamed Salah, Sadio Mane and Roberto Firmino]. The drop in quality below them, if there are injuries or playing Wednesday, Saturday, I think it will take its toll.”

Meanwhile, in Liverpool, Klopp hits back at Neville.

“How would that work? We don’t play Champions League or what?

“Gary should come over and tell me exactly how that works.

“How do you prepare for a game when you don’t focus on it? I don’t understand, do we play our kids or what?

“To focus on one competition can only be if you are out, or nearly out, or if it’s late in the season.

“Last year I don’t think even think Gary would have said ‘let City win in the Champions League’.

“Sitting in an office talking about football is different to doing the job.”

The last line was definitely a dig at Neville’s time at Valencia – a cheap shot – which shows how the so-called ‘charismatic’ Klopp is, in fact, utterly classless.

Perhaps another season with fuck all to show for it may make Klopp think twice about taking Neville’s word in the future. Boo-hoo!