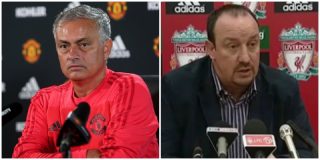 Jose Mourinho gave his pre-match press conference ahead of Manchester United’s trip to Watford this weekend.

The United manager interrupted the press conference to address the fans on some statistics regarding England striker Marcus Rashford, who scored two goals for the Three Lions during the international break.

When the sheets of paper came out, I feared the worst with memories of Rafa Benitez’s hilarious FACT rant at Sir Alex Ferguson, when the former Liverpool boss truly lost the plot.

Thankfully, Mourinho didn’t quite go that far or make an idiot of himself, but many have criticised his use of Rashford since getting the United job.

Mourinho took the opportunity to hit back at his critics:

“So I can imagine on Sunday I am going to be criticised for not playing Marcus but it is not my fault. He’s suspended so probably you should remind them he is suspended and cannot play.

“Performances with England, of course, I’m happy. He played well, competed well, he scored and especially in a period where he comes with some sadness after his suspension and was very good that he did that. If you don’t mind to lose a couple of minutes with me I’m going to do something not for you but the United fans because I think I hold myself to the United fans and for them, I am going to spend two minutes with you.

“On the season 16-17, Marcus Rashford played 32 Premier League matches, 11 Europa League matches, including the final, three FA Cup matches, six League Cup matches, including the final, and the Community Shields. He had 53 appearances but if you want to take to the minutes of play, he played 3,068 minutes and if you want to divide that by 90 minutes of the matches, he played 34.2 matches of 90 min matches in 16-17.

“In 17-18, he played 35 matches in the Premier League, eight in the Champions League, five in the FA Cup, including the final, three LC matches and the European Super Cup. He played a total of 52 matches with 2,676 minutes if you divide that by 90, gives 29.7 matches. So with me, in two seasons, he had 105 appearances, 5774 mins, 63.7 matches of 90 mins, including five finals, so the people that is speaking about these minutes, I think they are a bit confused.

I think this is the sort of information Alan Shearer and Jamie Carragher could have done with during the week, when urging Rashford to leave United in order to further develop his game as a centre-forward.

While he is not getting minutes as an out-and-out centre-forward, Rashford is playing regularly at the highest level for United. If he can’t develop his game in that environment, there’s something seriously wrong.

And, why should we take their word when neither would start Rashford ahead of Romelu Lukaku if they were in the hot seat?