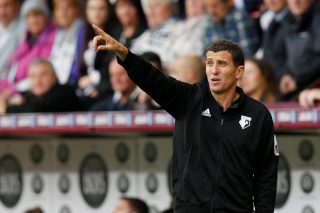 Watford host Manchester United with a perfect record of four wins from four since the new Premier League season kicked off, including a shock win over Tottenham Hotspur.

Javi Gracia has done a terrific job so far but we’re hoping United can put an end to Watford’s win streak and go on one ourselves after winning our previous outing against Burnley 2-0.

The Reds cannot afford another defeat so early in the season if we are to mount a realistic title challenge.

A win for Watford, however, would have Watford fans dreaming of following Leicester City’s example and targeting a title of their own.

LIVE STREAM: BT Sport subscribers will be able to stream the match online via the video player and the BT Sport app.

The two sides have met 10 times in the Premier League with Watford having won just one of those matches, with United taking the other nine victories.

Jose Mourinho’s men beat Watford 4-2 at Vicarage Road last season, though the Hornets won 3-1 there in 2016.

Watford are likely to welcome back Gerard Deulofeu, although Younes Kaboul and Tom Cleverley are still out.

Marcus Rashford begins a three-match suspension following his red card at Burnley, while Luke Shaw is unlikely to feature after suffering a concussion during England’s loss to Spain during the recent international break.

That could see summer signing Diogo Dalot make his debut, but Marcos Rojo could be in contention too.