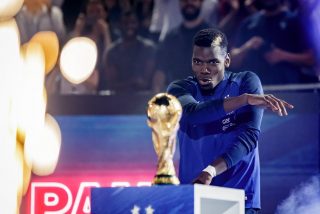 Full Time DEVILS had their weekly debate on Wednesday which we were more than happy to feature in.

The topic this week, arguably bigger than most weeks, was Paul Pogba and situation surrounding the Frenchman, who doesn’t sound very happy at United.

Pogba even dropped some inflammatory comments during the international break and many believe he is angling for a move to La Liga giants Barcelona.

In the debate, I come up against Paul (not Pogba!) and Muhammad, who are both on the same side of the fence, preferring to blame manager Jose Mourinho for the midfielder’s shortcomings.

Anyhow, enjoy the debate. I look forward to the next one…

Let us know in the comment sections how you feel about Pogba and who you think won the debate?