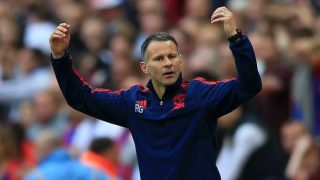 Three managers – David Moyes, Louis van Gaal and Jose Mourinho — have come in since then and failed to achieve such a feat thus far.

Moyes lasted just 10 months of the six-year contract he signed as Ferguson’s replacement, with Van Gaal and Mourinho following the Everton boss.

But Rene Meulensteen, formerly a coach under Fergie at Old Trafford, reckons Ryan Giggs should have been given the chance to manage United full-time (he did so as interim manager while the club sussed out candidates to replace Moyes).

The Dutchman told the Evening Standard: “Knowing that Ryan Giggs was keen on stepping into coaching – he was doing his licenses – he knew United inside out.

“The culture, the identity – he knows everything.

“Plus with us (Ferguson’s existing backroom staff) being around there, plus Ferguson still being there, that could’ve been an ideal scenario.

“Bringing somebody from the outside, I knew straight away that it wouldn’t matter who it would’ve been.

“But obviously for David Moyes it was a massive step up because he’s never played, never worked on a similar level.

“If they would’ve said we want to bring in (Jose) Mourinho then, or (Carlo) Ancelotti or Pep Guardiola or Jupp Heynckes, who have worked at Real Madrid, Barcelona, Bayern Munich, they wouldn’t be fazed.

“They know what’s expected of the club. They would’ve respected and understood the importance of the 26-year tenure of Ferguson.

“What has happened is it’s ended up in a very erratic period, which still hasn’t settled.”

While I disagree with Meulensteen about Giggs being ready to take such a job back in 2013, or even now, it is a very calculated argument and the club has entered a very erratic period which remains unsettled.

We may even need to take a different approach in the future if the club can manage to ever priorities on-pitch results over sponsorship deals.