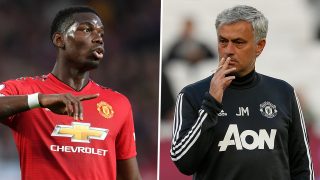 Those Paul Pogba comments were not that outrageous. ‘You never know’ is a euphemism for ‘I’m not sticking around forever’ but if anyone seriously thought Pogba was planning on a longer stay in Manchester than his previous one their lenses are a rosier tint than Paddy Crerand’s.

It emerged before Pogba rejoined United that his agent Mino Raiola had mapped out a career path that included a mid-20s transfer to Spain. ‘Three years and then Spain’ was Raiola’s alleged reassurance to Pogba as he mulled over his next career move in 2016. Some United supporters are as wide-eyed and idealistic as Tom Cruise in a Few Good Men, though. They can’t handle the truth.

Pogba’s initial preference was to move to Madrid instead of Manchester and the irony is it was Raiola who advised him on a homecoming. It is possible, Raiola will also ensure his second United stint ends after three years. It may turn out to be Catalonia rather than Castilla, but the country is still the same.

The last week has provided Pogba with some escapism from the tumult in England. France’s World Cup celebrations extended to a Parisian party in the Stade de France on Sunday night as players danced towards the golden trophy. Pogba’s ego needed massaging, for he is no longer expendable at United and in the wrestle for power his influence has started to erode.

He could not have failed to hear the deafening United supporters in the old Cricket End at Turf Moor hollering Jose Mourinho’s name repetitively before, during and after the win. Pogba, stripped of the armband upon Antonio Valencia’s return, still does not have a chant. That will hurt his ego.

Mourinho approached his followers at Burnley yet Pogba was the first player down the tunnel at Brighton. He fronted up for the cameras there and his self-criticism was also ambiguous enough to question the manager’s motivational tactics. Call it brand awareness. Although self-awareness is not Pogba’s forte.

In France, he has been plugging the brand by previewing the second series of his television show as gleefully as Alan Partridge at Tony Hayers’ funeral. SportsPro listed Pogba behind Golden State Warriors point guard Steph Curry as the most marketable athlete in the world before he rejoined United and Raiola sees Pogba as a footballer with the marketability to trump the NBA poster boys.

Pogba holidays in the United States every summer and Raiola briefs certain US broadcasters with lines on his clients who are already networking Stateside. Zlatan Ibrahimovic has turned the MLS into MLZ, as Raiola put it, Henrikh Mkhitaryan attended an engagement in Los Angeles while on United duty and Romelu Lukaku’s ‘brand’ is managed by Jay-Z’s Roc Nation company.

But back to the football. Pogba really should be United’s permanent captain by now yet lacks the consistency and the composure to have earned that recognition. He has leadership characteristics; academy-bred, multi-lingual, a proven winner and a figurehead with genuine presence. If Pogba can eschew Raiola’s nomadic penchant, he could yet become United’s first fixed Gallic skipper since Eric Cantona.

Pogba has belatedly lived up to Sir Alex Ferguson’s accusation that he did not show United ‘any respect at all’, though. Ferguson was wrong with that description six years ago; he marginalised United’s finest ‘homegrown’ talent of the century and Pogba was offered a quarter of what Wilfried Zaha agreed six months later. Pogba’s form, from phenomenal to feckless, provides the Ferguson acolytes with fuel but let’s not pretend he was entirely right. Ferguson gifted Zeki Fryers more starts than Pogba in 2011-12. Scott Wootton, Marnick Vermijl and Ryan Tunnicliffe all started under the Scot whereas Pogba did not.

What is disrespectful is Pogba’s inference he is ‘not talking’. He seldom stops post-match but did following his ‘monster’ performance against Leicester and wailed he would be ‘fined’ if he spoke with candour. He got the message across and hogged the post-match coverage of a victory whilst undermining the manager who had spoken diplomatically about him. At Burnley, he teased ‘not today’.

Then Pogba pulled a trick that is as old as time immemorial; he prattles about his future on international duty and destabilises the club by speculating over a future move. Pogba saying he is ‘not talking’ is a little like Elon Musk suggesting he does not want any attention.

He’s not sticking around.