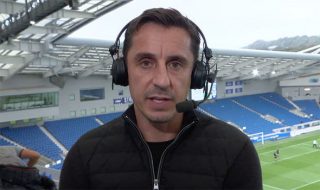 Gary Neville believes Manchester United have turned a corner under Jose Mourinho, but still feels they will struggle to mount a serious title challenge.

The former United captain feels the suggestion that Mourinho is finished at the top of the game is “nonsense”.

The Reds have endured a challenging start to the season under the Portuguese tactician, losing two of four matches in the Premier League amid reported unrest within the club.

There has been a breakdown in the relationship between Mourinho and France midfielder Paul Pogba been the topic of much debate, while the manager is also said to be at odds with executive vice-chairman Ed Woodward over transfer activity this past summer.

People are now asking themselves whether Mourinho is the right man for the job, but Neville feels that it is far too early to write off such a successful manager.

“He’s having a difficult time, but finished? I genuinely think that’s a nonsense,” Nev told The Times.

“I think Jose is a brilliant manager and, in a 25-year career, young managers will emerge, people will ask questions if you aren’t successful.

“Believe it or not I liked the Tottenham game (United lost 3-0), certainly the first 40 minutes. I watched [the win over] Burnley and thought it was really good.

“I think they’ve turned a corner.”

Having ended the 2017-18 season in second place and without a trophy, the pressure is on to mount a title challenge this campaign.

Neville is not confident about that or when it comes to finishing as well as last season.

“I’m still hopeful that somehow, through siege mentality more than anything, they can mount some sort of challenge that really just disrupts people,” he said.

“If they can stay in it until January and maybe get one or two defenders in, they might have a chance. But I doubt it. I think United will be third or fourth.”