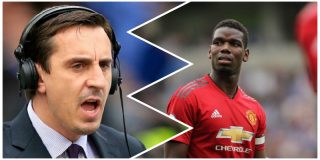 Former Manchester United captain Gary Neville has warned Paul Pogba not to become “a mercenary or a mutineer” as rumours continue to swirl that the Frenchman may be planning an exit from Old Trafford.

As speculation heats up in regards to a move to La Liga giants Barcelona, Pogba has fuelled the story machine with questionable quotes while on international duty with France this past week.

Neville was speaking to Matt Dickinson of The Times about Pogba, who he has a number of opinions on from a variety of points of view, including his fan’s view that “no-one is bigger than the club.”

He added that, if the midfielder is to force his way out, he needs to do it in the right way: “If I was still in that dressing room giving personal advice it would be, ‘Paul, it’s obvious you want to play somewhere else but be professional. Don’t be someone who is seen as a mercenary or a mutineer. You don’t need to do that.”

According to Fabrizio Romano of The Guardian, United rejected a €50 million bid for Pogba from Barcelona in the summer. A laughable offer and one made to simply unsettle the player.

However, that offer also included centre-back Yerry Mina and midfielder Andre Gomes. That… for a player who United paid Juventus £89 million to re-sign in 2016? Give me a break.

But rumours of a potential Pogba departure are going nowhere. It was recently reported that his agent Mino Raiola has imminent plans for his client to move to Spain, as per Samuel Luckhurst of the Manchester Evening News.

The 25-year-old enjoyed a fantastic summer in which he played a key role in France winning their second World Cup, though his performances since returning to United have gone back to being inconsistent as before.

Watch Wednesday’s debate on Pogba via Full Time DEVILS below.