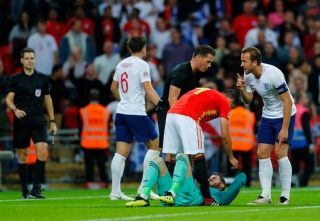 David de Gea has been slammed by Emile Heskey for ‘feigning injury’.

The comments from former Liverpool striker Emile came after England’s defeat to Spain.

As the pair collided the ball slipped out of De Gea’s hands and the Arsenal forward quickly slotted home.

Welbeck thought he had earned the hosts a late equaliser but it was controversially ruled out by the referee Danny Makkelle, who deemed that the Arsenal forward had fouled De Gea in the build-up to the goal.

The Spaniard then laid on the turf and was treated by Spain’s medical staff.

Harry Kane later suggested that the Dutch referee “bottled it” and his comments have now been backed up by Heskey.

“Very disappointed, I don’t think he [Welbeck] did anything wrong,” said Heskey, speaking at the launch of GOALS’ Restart Game campaign in Leicester, as per the Birmingham Mail.

“He can’t go anywhere can he? It’s not like he pushed him or put his arms up or anything, he stood there.

“He [De Gea] came down on top of him and the worst thing for me is feigning an injury afterwards.

“There was nothing wrong with him, you were the one that fell onto him. The ball hit him, came out of your hands and he’s tapped it away.

“I don’t see what he could have done different, as in Danny.”