After the first international break since the World Cup, Manchester United fans will be keen to see whether the team can build on a winning streak from the 2-0 victory over Burnley last time out.

Burnley have been abysmal though, which may have contributed to United’s 21 shots throughout the game, but that still bodes well for United fans who have questioned Jose Mourinho’s conservative style of play since his arrival in 2016.

In the last five years, it has not been a regular occurrence to see a United side flood the opposition’s penalty area with bodies in such a manner, so, hopefully, we’re not waiting that long to see it happen again.

And even after Marcus Rashford had been sent off for an act of immaturity, United still looked the team more likely to add to their scoring with Paul Pogba and Romelu Lukaku linking up brilliantly together in advanced positions.

While we don’t think United will go to Vicarage Road with the same approach, given their incredible form of late (four wins from four), it would be nice to see the Reds go into the game trying to be pro-active rather than reactive, in the mind frame of grabbing an early goal and more before closing out the game.

Form aside, there’s enough class in our squad to end Watford’s winning streak. We’ve played them in the Premier League 10 times down the years, winning nine and losing 1. They may be hitting top form now but that will end sooner rather than later. (Not expecting a repeat of Leicester’s 2015-16 season)

Luke Shaw’s absence at left-back will be felt, although Ashley Young is capable of filling the role as he showed last term. We’re expecting the England international to be joined by David de Gea, Victor Lindelof, Chris Smalling and Antonio Valencia. Hopefully, Diogo Dalot gets some minutes from the bench to make his first-team debut.

In midfield, I’m split with two minds on Paul Pogba. My heart says to drop him, my head says otherwise because Mourinho doesn’t need additional drama from the press. The Frenchman has already created a cauldron of fire on that note.

If it was up to me, though, Fred would come back into the team joining Nemanja Matic and Marouane Fellaini. The Belgian deserves a start – if fit – following his heroics against Burnley. There may even be a shout for Andreas Pereira, who adds speed to our attacks by getting the ball forward quickly and Lukaku may be able to take advantage of that.

Further forward there are many options. The likes of Anthony Martial and Juan Mata haven’t had a sniff this term but it is early days and the manager is always going to find it hard to keep every player happy.

We have gone with Romelu Lukaku joined by Alexis Sanchez and Jesse Lingard. 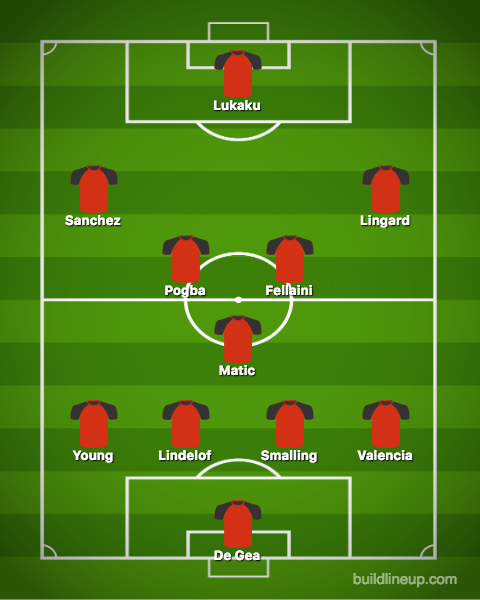 Let us know what you think about the above team in the comment section.