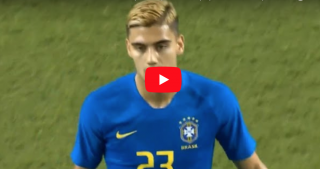 Manchester United fans haven’t seen Andreas Pereira in several weeks since being omitted from the squad after the shocking defeat to Brighton.

Pereira earned his call-up to the Brazil national team following an impressive pre-season and opening few seasons to the new Premier League campaign.

Born in Belgium, the United starlet could have played under Roberto Martinez, who Stretty News understands was keen to hand Pereira his first international cap.

Instead, Pereira choose Brazil and made his debut last night in a 5-0 win over El Salvador. Neymar opened the scoring after just 3 minutes of play, Richarlison scored a brace and the other two goals came from Barcelona midfielder Philippe Coutinho and Paris Saint-Germain defender Marquinhos.

The footage below shows Pereira playing in a deep-lying midfield role, where Mourinho has played him of late, and we see some precise passing and awareness to intercept the ball in order to retain possession.