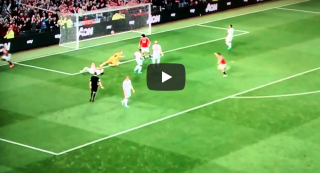 On this day in 2015, Anthony Martial made the best possible introduction by scoring on his Manchester United debut against Liverpool.

The Reds were being managed by Louis van Gaal at the time and everyone thought he had discovered a gem of a player, albeit for lots of money but we couldn’t care less about that at the time.

When watching this clip it’s difficult not to compare it to Martial today and that doesn’t reflect too well on him as a player. The Frenchman is not in manager Jose Mourinho’s good books with his agent claiming he wanted to leave in the summer.

The Times recently stated that Martial would sit down and sign a new five-year contract extension at United with the view out outlasting the manager. That came as a surprise to us after a summer of tensions between Martial’s entourage and Mourinho, while the club was in the middle of the crossfire.

If only Martial could get his head down and start working hard again rather than sulking over Alexis Sanchez starting ahead of him. It’s completely up to him to give Mourinho a selection headache. He’s doing anything but that now.