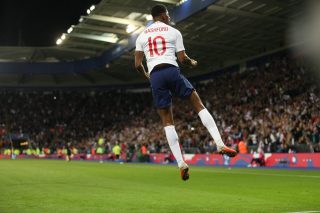 The 20-year-old scored two goals in four days for England, which includes a winner against Swizerland last night, showing what he can do when given the chance.

Despite breaking onto the scene as a wonderkid in the 2015-16 campaign, Rashford’s progress appears to have stalled slightly under Jose Mourinho though when he plays for England, he appears to be in more of a comfort zone.

At United, Rashford is usually shifted out wide and more recently onto the bench following Alexis Sanchez’s January arrival.

He points to the England ace’s team-mate Romelu Lukaku, who had to leave Chelsea as a youngster to go and impress at Everton before earning his mega-money move to United.

That seems like the pathway a number of former England internationals want Rashford to take. Alan Shearer was singing from the same hymn sheet this morning too.

Asked if Rashford needs to leave United, Carragher told Sky Sports, as quoted by Caught Offside: ‘I think so, yes. In order to play centre-forward for Manchester United, you’ve got to be world class.

‘Rashford’s not world class yet. He might be at 23 or 24. So Rashford might have to move away to come back to a top team.

‘I don’t see him ever displacing Lukaku while he’s there. But remember Lukaku at Chelsea, he had to come away to Everton.

‘Then ended up as the top scorer one season at Everton in the Premier League, then gets his move to Manchester United.’