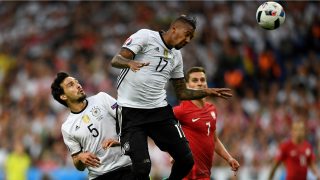 Bayern Munich defender Jerome Boateng was strongly linked with Manchester United throughout the summer, though a deal never materialised as he snubbed a transfer to Old Trafford.

The Germany international has revealed a personal phone call with Jose Mourinho to explain his decision not to make a return to England this summer despite being honoured by the United’s interest in signing him.

‘I called Jose Mourinho, I told him his interest was an honour for me and thanked him for trying so hard for me,’ Boateng told German newspaper Bild, as cited by Caught Offside.

‘I explained to Jose that it’s difficult to leave Bayern, and if I do, everything has to be in place to top this club.’

United could really have done with a defensive addition but signing a player like Boateng, with a history of numerous injury problems, may not have been the answer.

You can hardly blame Boateng for having concerns about leaving Bayern. The Bundesliga giants win their domestic title more often than now, whereas United are in a transition stage and are some way off his former club Manchester City when it comes to delivering silverware.

The Reds were linked with a host of other names at the back over the summer, with Mourinho having to rely on Chris Smalling, Phil Jones, Eric Bailly and Victor Lindelof.

The Portuguese tactician even resorted to playing Ander Herrera in a back three against Tottenham because of his shortage of options in that particular department.

Many will question whether Boateng would have been the right solution, but his snub is just one of many frustrations that has led to United’s slow start to the season.