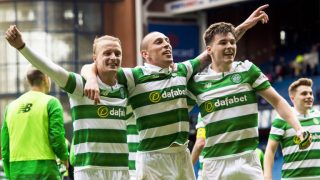 Kieran Tierney is one of the brightest prospects to come out of Scottish football in recent years, therefore, it’s no surprise to see speculation following him all summer long.

The youngster was being heavily linked with a move to Everton during the last window, though his links with Manchester United have been ongoing for the past two seasons.

And, after this admission from former Celtic full-back Mo Camara, the stories won’t be going away anytime soon.

Mo told SunSport,  as per celtsarehere.com: “I done some scouting for Manchester United and scouted for Sunderland and we followed Kieran Tierney loads.

“He’s a very good left-back – he will go for big money if and when Celtic decide to sell.

“It’s one of those where the fans, manager and the chairman – none of them will want Tierney sold.”

Mo was signed for Celtic under Gordon Strachan back in 2005 and spent a season with the club before moving on.

Tierney has made it clear on several occasions that he’s happy at Celtic and wants to win that famous ten in a row. It doesn’t look like Steven Gerrard will be stopping them anytime soon either.

Fancy competing with Luke Shaw for a place in the team?